“Up-and-coming tenor Blake Morgan gave a rich and expressive performance” and “his phrasing had an almost meditative quality” – The Daily Page, Madison, WI

Blake Morgan enjoys an international career that spans the worlds of early music, oratorio, opera, musical theater, jazz, and contemporary music. Past seasons have included performances of Handel’s Messiah, Bach’s Magnificat, Janácek’s Diary of One Who Disappeared, and Vaughan Williams’ On Wenlock Edge. Operatic roles include Tamino in Mozart’s Die Zauberflöte and Pish-Tush in Gilbert and Sullivan’s The Mikado. Blake’s voice is particularly at home in the early music setting, and he has earned attention for his clarion tone in recent recitals with theorbo and harpsichord.

Blake currently tours and records with the chart-topping chamber octet VOCES8, based in London. Prior to his move to the United Kingdom, Blake was a member of the  GRAMMY®-award-winning vocal ensemble Chanticleer, also having previously been a member of the Minneapolis-based men’s group Cantus. Mr. Morgan performed with the chamber choir, Conspirare during the group’s 2014/15 GRAMMY® award winning season. Future recording projects include a series of choral discs for the Decca Classics label with VOCES8.

Highlights of the 2017 season include European performances at the Mito Festival Italy, Thüringer Bachwochen Germany, at the Paris Philharmonie and Brussels Bozar, and a Christmas tour to China and Japan (including performances in Oji Hall and Tokyo Opera City). He will also sing with L’Arpeggiata and Christina Pluhar in performances of Monteverdi’s Orfeo. With VOCES8, he will tour the USA twice, with concerts and residencies all across the country.

In a recording session with Theorbo player, Kyle Thompson, Fall 2013 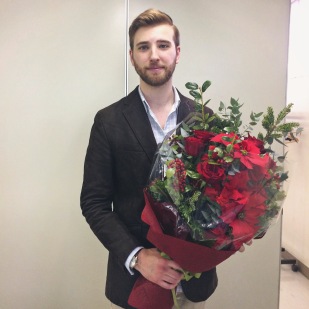 Given this wonderful bouquet after a performance in Japan 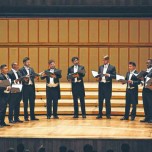 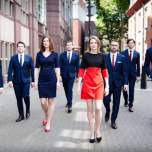 Recording session with the WMU chorale with Blake as a soloist

Soloist in Britten’s “Rejoice in the Lamb”, Spring 2011 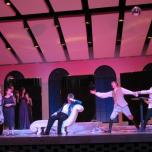 Blake in a recital performance at WMU, Spring 2012 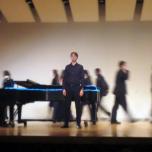 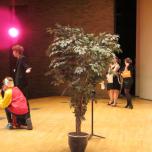 Performing as Marius in the WMUsic Showcase, Fall 2010 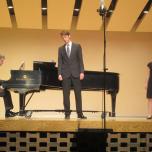 Performing sections of Janácek’s “Diary of One Who Disappeared” in recital, Spring 2013

Performing in Canada with Chanticleer 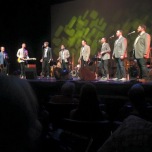 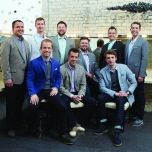 Blake and Roger Treece after a performance in LA 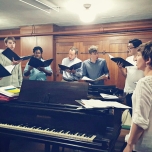 Rehearsing at Yale with Audivi 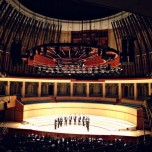